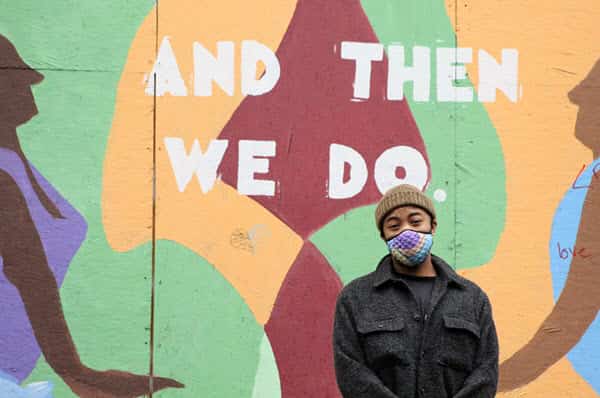 When Daren Todd opened The Downstairs Gallery in August, he was surviving, accepting opportunities after the coronavirus pandemic took both his bartending gig and his promising music career. Todd felt called to pursue his visual art practice with full force, and the chance to formalize an art gallery from auxiliary space at the downtown Portland studio Yoga on Yamhill seemed promising, if nerve-wracking.

“I didn’t have a choice but to take a chance,” Todd, who is an out transgender curator, told Street Roots.

The Downstairs Gallery is a collaborative effort between Todd and Yoga on Yamhill’s co-owner, Jen Johnson. Johnson felt a need to repurpose the yoga studio’s extra 1,500 square foot space amid the pandemic. She knew the space’s next iteration would have to safely unite people, keeping with Yoga on Yamhill’s community-minded ethos, but she couldn’t do it on her own.

“He’s super creative. He’s great to work with,” Johnson said of Todd. “He’s younger than me, so it’s really cool to see someone younger diving into this and coming up with ideas. We’re both kind of brainstorming on it, and he knows a lot more about the art world than me, which is fun because I’ve been immersed in yoga for the past 10 years. It’s been cool to see this from his perspective and see what he’s chosen.”

Join us Via Zoom for this meeting: