Taylor is one of six global champions being honored Nov. 11 on Rotary Day at the United Nations in Geneva, Switzerland. The event honors those who make a positive difference in their community, their country and around the globe.

Taylor will be honored and will celebrate with current RI President Ian Riseley, RI directors, foundation trustees, leaders from the United Nations and renowned humanitarians.

Taylor developed a Rotary Foundations global grant to improve sanitary conditions for waste collectors in Pune, India. Waste collectors together handle 20 tons of unwrapped sanitary waste every day. Stevenson collaborated with SWaCH, a waste-collector cooperative, to create the “Red Dot” campaign, which calls for people to wrap their sanitary waste in newspaper or bags and mark it with a red dot.

This helps waste collectors identify sanitary waste and handle it accordingly. Stevenson developed all the educational imaging for the campaign. She also secured in-kind offerings of support, including free training space and campaign printing.

Pearl Rotarian Anne Oneill, who is the past chair of the International Service committee and served as PPRC's point person for the Pushing for Peace, Sanitation and Dignity for Pune’s Waste Pickers, said this of Taylor, “Taylor Stevenson is a master of working with and building on the support of local institutions, and is a fierce advocate of society’s most marginalized. For the project, Taylor developed all of the educational imaging used for the campaign, liaised between various stakeholders in a foreign culture, and even lived in the slums with the waste pickers in order understand their lives better.”

We are proud and honored to support Taylor in her peace-building work and that Portland Pearl Rotary and District 5100 are able to be a part of it. Taylor would like to extend her gratitude to Portland, Pearl Rotary, Anne Oneill, District Governor Renee Campbell, and Past District Governor Michael Caruso.

We look forward in hearing Taylor’s latest updates on the Pune waste pickers' project when she speaks to Pearl Rotary on Tuesday, Oct 3. 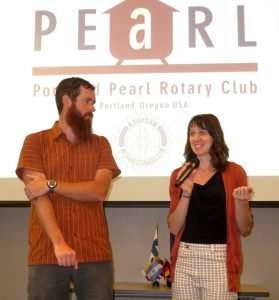 Let’s get Taylor and Brodie to Geneva!
We are beyond excited that Taylor has received this very distinguished honor from Rotary International and United Nations. We have informed Taylor that as a Rotary club and with some assistance from District 5100, we would pay for all of Taylor and Brodie’s (Taylor’s husband) air and ground transportation from Portland to Geneva, Rotary International already has housing taken care of. Our goal is to raise $2,318. We have a nice start of $380 [through Sept. 27]. Taylor and I are able to accept cash and checks made out to Taylor Stevenson. Additionally, I will be attending the peace-builder club meeting in October to also try and solicit funds from them, as well as District 5100.

Taylor's Rotary connection to the Pearl club
Taylor Cass Talbott (previously Taylor Stevenson) is an artist and program designer who uses art and waste to contest the social and economic exclusion of marginalized people. She completed a Master’s in Peace Studies as a Rotary Peace Fellow in Tokyo from 2011-13. While working as a waste reduction specialist in rural Bhutan from 2013-16, the Portland Pearl Rotary Club contacted her with an interest in collaborating on a Rotary International Global Grant. Taylor agreed, going on to develop a peace and sanitation project with the SWaCH waste picker cooperative in Pune, India. When the “Pushing for Peace” project was approved by Rotary International, Taylor and her husband, Brodie Cass Talbott, worked with SWaCH in Pune for 8 months helping to implement the project. You can learn more about her work and the Pushing for Peace project at: www.livedebris.org

Here's text of RI announcement
The Sept. 21 announcement of the award to Taylor Stevenson included notice of the event and bios of the six peace champions. Here's a link from Rotary International:
www.rotary.org/en/rotary-2017-peace-champion 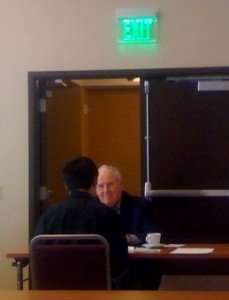 On April 13 at the Speed Interviewing event, Rotarians conducted mock one-on-one interviews with students...and then provided feedback and general advice. "This [was] a great chance to support students as they put their learning into practice," said Sarah Lechner, training coordinator for Open Meadow's program. Six Rotarians participated, including PPRC Vocational Service Director Yelena Girich, at the event held in downtown Portland at the Marriott Courtyard hotel.

Three days later six Rotarians contributed an hour of volunteer service at the Networking Fair, this time at the Northwest Natural conference room. The event operates like s standard job fair, only in reverse. Job seekers present at their own booths, while potential employers circle the room to meet the candidates and offer feedback. Students, many about to enter college for the first time, shared career plans ranging from health care to human resources, from computer networking to automotive services.

"This was (most) valuable and much appreciated by the students at Open Meadow," said Yelena. "I myself felt very proud to be part of our group that represented Pearl Rotary." 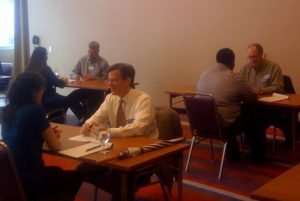 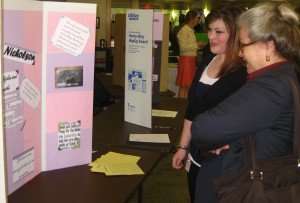 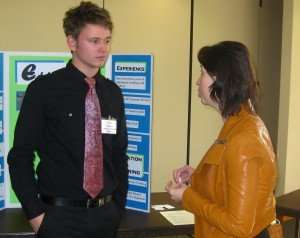 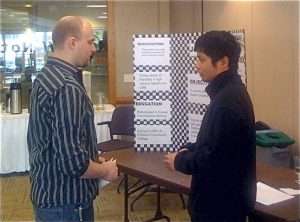 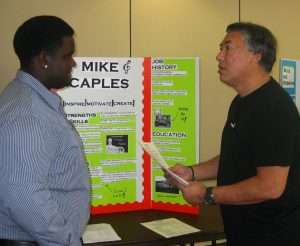 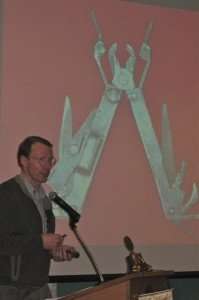 Tim Leatherman, founder and chairman of the board, told the story of how he created the hand-held multi-tool and then waited eight years for the first sale.

The idea came on a budget trip to Europe when he and his wife toured in an old car that frequently needed repairs. The tool began by adding a pair of pliers to a pocket knife. Leatherman showed images of early prototypes. "It took three years to come up with a tool I thought the world would like," the Portland native said. "I certainly liked it."

He applied for a patent; from countless patents, the New York Times chose his tool for a feature story. Leatherman expected his big break had come. But only one inquiry came.

"I had a knife with a pair of pliers," he remembered. "I went to knife companies, but they saw it as a tool. To tool companies, it was not a tool; they said it's a gadget."

Undaunted, Leatherman continued his search for sales. He tried the U.S. Army...and AT&T...but with similar results.

In 1983, Leatherman and his friend, Steve Berliner, formed Leatherman Tool Company. It was a time that the company took off, initially with an order from a mail-order catalog, Early Winters. Prime promotional space was given in the printed sales piece. "The strange-looking contraption," as Leatherman described his invention, had "tremendous word of mouth sales."

Just a few hundred tools were sold with the initial orders (including a sale to Cabella's). But sales from the then home business were on the rise 29,000 in 1984, and 70,000 in 1985. Leatherman, headquartered in northeast Portland and today with 300 employees, reached the one million mark in orders in 1993. "Today we make and sell 8,000 tools a day," Leatherman reported.

Leatherman retired in 2005 as president, but remains today as majority owner and boar chairman.

The entrepreneurial effort ended with a question and answer period and then the club's weekly "Brag" session. At least five Rotarians endorsed the Leatherman tool, adding their own vignettes of reinforcement:

We carry six different SKU's of Leatherman tools.  Ace now has Leatherman tools in the warehouse. We originally had to buy them direct. I really don't have any personal experiences in regards to Leatherman tools. I can say that the other two competitiors are not the quality of the Leatherman. We only carry Leatherman because that is the most requested brand. Not too long ago I got a phone call requesting 12 tools for a Chinese business delegation. Of course, I did not have that quantity of one SKU in stock. I referred the customer to Leatherman direct. Never did hear the outcome but I can safely assume that Leatherman took care of the customer. That is one of the good things about having local manufacturing.

I graduated from high school in 1984 and my freshman year in college my step-father gave me, as well as all of the men in our family, a Leatherman tool for Christmas, sure that I'd use it often. I'm sure I didn't use it as often as I could have but I remember his excitement in finding this new tool and unique present.

On a trek in Nepal, I carried a Leatherman tool but decided to give it to our Tibetan hosts as a gift for putting us up for a week.  I watched in amusement as the man I gave it to delightedly used it to pull out whiskers one by one.

I have been a volunteer ski patroller on Mt Hood since moving to Oregon in 1974.  I’ve carried a Leatherman tool in my fanny pack for over 20 years and used it for adjusting bindings, repair emergency sleds and equipment, cut zip ties and rope, file ski edges, peel oranges and a hundred other things. I’ve never had to use it on a patient, however! If ever you choose to make a tool more specialized for winter sports use, it would have fatter, stronger screw drivers, maybe a 90 degree edge file. Keep up the great work!

I got my first Leatherman multi-tool a little while before I went into the Marine Corps. While in the Corps, I used it for every conceivable thing, from cleaning my M-16 to making animal traps and snares during mountain survival training. It didn’t take long before my fellow Marines were asking if they could borrow my multi-tool and eventually my Leatherman became invaluable and was used by all. However, after only a short time virtually everyone saw the value enough to get their own. I wish I could say I still had my original Leatherman, but it was stolen a few years back. After my loss, I needed a replacement; this was when I made an upgrade from my old Leatherman multi-tool to the new Leatherman Wave. It was everything the old one was and more. This is the one I still have now and I use it just as much if not more than my old original. My Leatherman has traveled the world with me from Asia to Europe to the US. It is without question one of the best investments I have ever made.

P.S. from Don Smith: Drew now has two new Leathermans. He was the winner of a tool Tim Leatherman brought as a door prize during the Pearl Rotary meeting.